Advantages of the Vedolux Lambda Models:

Here are some differences between this new series of boiler and the non-lambda fan models like the Vedolux 30 and 37. 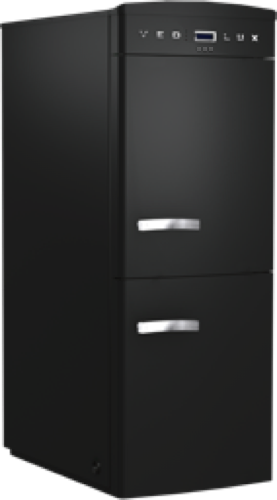 Vedolux Lambda 650 boiler works through reverse combustion with the help of a suction fan, but in addition a lambda sensor, also known as an oxygen sensor is installed in the boiler flue that constantly analyzes how the boiler is burning by checking the proportion of oxygen in the exhaust. Then in real time the control makes small corrections to the air mixture to enable this boiler to reach outstanding efficiencies.

Vedolux 650 Facts
The combustion chamber holds 7.5 cu.ft of firewood and accepts wood up to 20″ long.

When properly used and maintained the Vedolux 650 boiler has an output of approx 65 KW or 220 kBtus per hour. This boiler tests resulted in 92% efficiency when tested by the Swedish Test Institute. The test protocol is the standard for euopean manufactured wood boilers. The efficency number can be compared to other similarly tested products. Most USA tests use the “higher heating value” of the fuel vrs the european standard that uses the “lower heating value” of fuel. The resulting efficiency value would be lower if tested using the US “higher heating value” formula.

All flue pipes are cleaned through a door located on the front of the boiler. Rounded flue pipes are easily brushed out keeping soot and deposits from accumulated in missed corners. Because it is so easy to sweep it will get done, keeping your boiler burning efficiently – saving you time and wood!

The volume of the accumulator tank(s) should be dimensioned to suit the size of the house and the output of the boiler. 770 gallons of water storage is the minium needed to accommodate the output the Vedolux 650. The 650 size is designed to heat larger homes. Smaller sizes of this series of boiler are also available in 35Kw and 45K outputs. More specs can be found under the download tab.

There are no reviews yet.

Be the first to review “Vedolux Lambda 650” Cancel reply